Bungee jumping, also spelt “Bungy” jumping) is an activity that involves jumping from a tall structure while connected to a large elastic cord. The tall structure is usually a fixed object, such as a building, bridge or crane; but it is also possible to jump from a movable object, such as a hot-air-balloon or helicopter, that has the ability to hover above the ground. The thrill comes as much from the free-falling as from the rebounds.]
When the person jumps, the cord stretches and the jumper flies upwards again as the cord recoils, and continues to oscillate up and down until all the energy is dissipated.

Wingsuit flying is the sport of flying the human body through the air using a special jumpsuit, called a wingsuit, which adds surface area to the human body to enable a significant increase in lift. Modern wingsuits, first developed in the late 1990s, create the surface area with fabric between the legs and under the arms. A wingsuit may be referred to as a birdman suit, flying squirrel suit, or bat suit.
A wingsuit flight ends with a parachute opening, so a wingsuit can be flown from any point that provides sufficient altitude to glide through the air, such as skydiving aircraft or BASE jumping exit points, and to allow a parachute to deploy.
The wingsuit flier wears parachute equipment designed for skydiving or BASE jumping. The flier deploys the parachute at a planned altitude and unzips the arm wings, if necessary, so they can reach up to the control toggles and fly to a normal parachute landing.

Parachuting, also known as skydiving, is the action of exiting an aircraft and returning to earth with the aid of gravity while using a parachute to slow down during the final part of the descent. It may or may not involve a certain amount of free-fall, a time during which the parachute has not been deployed and the body gradually accelerates to terminal velocity.

The best 20 bungee jumps in the world

The 10 Best Places to Skydive Around the World 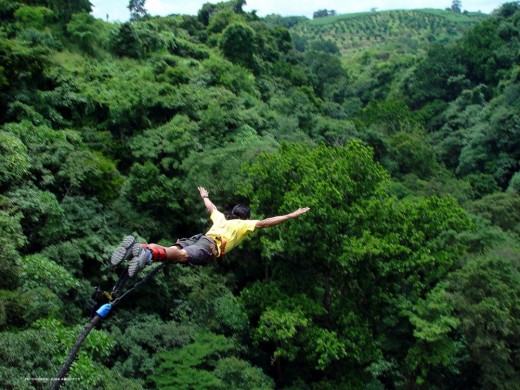